If you do a search for "open faced chinese poker payouts" you'll find my last post is the third hit on Google (it was second for a while). I consider it no small feat to show up on the first page of Google so I figured I'd shoot out another, more complete post about OFCP now that I've had a chance to play it a few times.

The Rules and Payouts

Here is a brief recap of how to play from cardplayer.com


Like regular Chinese (high), Open-Face Chinese is structured into three hands of descending value, 1. A five-card hand in the back (the strongest) 2. A five-card hand in the middle and 3. A three-card hand “up top.” If your middle is stronger than your back hand or your top is stronger than your middle, you “foul.” Open-Face Chinese can be played with two to four players and begins with five cards dealt to each player. The player left of the button places the five cards anywhere in the back, middle and top (not to be moved at any other point in the hand). Afterwards, each player is dealt one card at a time, starting from the left of the button, until 13 cards are dealt to each player. The goal is to make the strongest possible hand, accumulate as many royalties as possible without fouling.
The widespread royalty system gives 20 points in the back for a royal flush, 10 points for a straight flush, eight for quads, six for a full boat, four for a flush, and two for a straight. If any of those hands are achieved in the middle, the royalties are doubled. On top, you get one point in royalty for every pair over sixes up to nine points for aces.

The way we play you also get 10 for trip deuces up front adding one unit for each rank on up to 22 for trip aces.


Left out of this description are a couple of important points. First of all, you compare your front hand, middle hand and back hand to that of each of your opponents and if you beat an opponent in 2 of 3 spots you win 1 unit. If you win all 3 or the other person has a foul hand and you have a legit hand you win 6 units. Why 1 and 6 and not 2 and 4 or 1 and 2? It turns out there needs to be a strong disincentive you fouling.

Secondly, the player to the left of the button sets his (or her) 5 cards and exposes them, before the next player sets his cards and so on. This is important because as you see more cards exposed it gets easier and easier to decide which way to set your initial hand.

The third key point is the player to the left of the button resolves payment with the other players first and then the second player and so on. This is important because if the first player has a foul hand he pays everyone and then his hand is mucked. Imagine that all 4 players have a foul hand. The first player pays players 2, 3, and 4 while the second player would only pay players 3 and 4, and player 3 would only pay player 4. Player 4 pays no one and collects 18 units.

So far the only strategy I've seen in print is "avoid fouling your hand." This game is very complex and I'm sure you could write a whole book about it, but here are a few tips that go beyond, don't foul.

#1 - Throw that basic advice out the window! You have to take some risks. If you're too afraid of fouling your hand, you'll never collect on the big payouts. As in many other forms of poker, in the long run playing it safe is not safe at all.

#2 - When you're in first position focus more on making a legit hand, and take more risks when you're in later position. If you foul in early position you have to pay everyone at least 6 units. In later position you'll collect from other players with foul hands in front of you even if you foul. Don't take this idea too far - you still have to go for it in early position if the situation warrants it, but if you have a decision to make, keep this in mind.

#4 - Straights underpay. It's usually not worth risking a foul hand to go for a straight in the back. Of course if you end up with 4 big cards to a straight, you want to get them in back, but don't risk paying everyone else 6 in an effort to collect a 2 unit royalty.

#5 - Even though you don't want to start with pairs up front, you're best chance of collecting a royalty over 6 is with a big pair up front. Don't be a pussy!

#6 - Realize that if you're playing four handed and.there is only 1 card left in the deck that makes your hand, you have a 25% chance of getting it (assuming all players have been dealt and even number of cards to that point). Someone has to get it right? It doesn't feel right to look at a stack of 32 cards with only one in there that helps you and think you're going to make your hand 1/4 of the time, but that's how it works.

#8 - Be aware of situations where you can make a fair hand and still get scooped by everyone. There's no reason to focus on making a fair hand if you're just going to lose to everyone else anyway. Sometimes you have to do things that are very risky in order to give yourself any chance at all.

#9 - Be aware of situations where it looks like multiple other players are on the way to fouling. In these spots cancel your plans to go for the royalties and make a hand that is fair.

#10 - You're front hand is the garbage depot. If you're unsure how to set your first 5 cards, lean towards none up front or your lowest card up front.

Bonus! Take your time and be aware of the cards that are out before you make any decisions.

If you agree or disagree with any of these concepts, sound off in the comments. Some discussion will help us all improve!

I think these are good basic strategies. I think if you have a 3+ card flush in ur starting 5, always go for it in ur back. Open ended 5 card straights, or else break them for pairs+ as u said... lowest to highest, top down. Can you let me know how a Open Face Chinese Poker tourney works? Im thinking about playing it at PCA this year... but $2200 rebuy, 30 min. blinds is kinda insane? Especially since it's so new. Are you on Twitter? Please tweet me links to ur future posts on this subject please :) Thanks!

is it correct where you say start payouts from player 1 and go from there, so if all players foul player 4 still wins?, ive been playing alot recently and we havnt been doing this, if all players foul we've been saying no one payes anyone. does this mean our game has less of a skill element and more luck or cthe cards because strategy is limited?

Are you sure that if all 3 players foul its not just a foul. This is how we have been playing it. Link to this rule elsewhere please??

Some help for the math side of things...
https://play.google.com/store/apps/details?id=com.ofcprobabilitycalculator&feature=search_result#?t=W251bGwsMSwyLDEsImNvbS5vZmNwcm9iYWJpbGl0eWNhbGN1bGF0b3IiXQ..

Hi Dave,
your blog is very nice & tips are very useful. Keep up good job and gl @ the tables. Cheers

Not sure this is correct. I think A SETTLES with B then C then D, meaning if all fouled it would be a wash. I think the pay order matters when players are short stacked (table stakes) if B gets all A's chips C, and D dont get payed

I believe you have done some math wrong on #7.

If you want an advanced AI to help you with OFC strategies, check out www.PlayWarren.com. Many pros on the circuit use it to work on their games.

This week we took the blue pill and entered THE MATRIX! Wait it's actually THE M8TRIX! A spelling I truly H8! The whole building is powe... 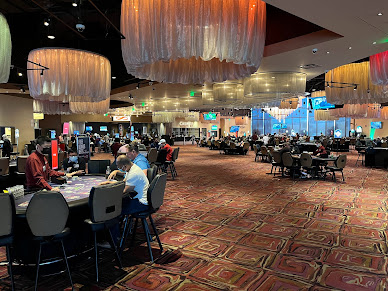 Dave
I played poker full time mainly online for 88 months from 2003-2010 with 83 winning months. In the years since I've worked for 3 early stage start ups and since 2018 have been leading marketing partnerships for StubHub. In 2022 I'm currently trying to remember what I used to know about poker in the hopes of crushing the souls of the recreational players across the bay area.